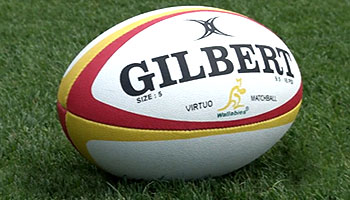 With 99 days left until the British & Irish Lions tour of Australia, Gilbert have today revealed what their new Virtuo match ball will look like. It’s not a new ball as such, but will have a custom colour scheme for the series.

Gilbert Brand Manager Jon Clarke chatted to young Wallaby Liam Gill about the new ball, and the excitement that is building for the series.

“Everyone understands the aura that the British & Irish Lions bring, not only the team.. the supporters, the atmosphere will be great. It’ll light up every city they touch,” said Gill.

The ball has been used for the past two seasons in Australia, but has taken on a new look as it encorporates the colours of the two famous sides, gold for the Wallabies and red for the Lions.

“Australian’s have been waiting 12 years for the Lions to return to our shores and the anticipation surrounding this tour is building every day,” said Australian Rugby Union CEO Bill Pulver.

“Unveiling the new match ball that will be used for all nine of the Lion’s matches on Australian soil is another exciting milestone in the countdown to the Lions arriving.

“The inclusion of the Qantas Wallabies Gold and the Lions Red on the ball will add to the spectacle and magnitude that is a Lions Tour,” he added.