Their last win in this level of competition came in 2006 when they overcame London Irish 36-34 in a pulsating final at the same ground.

For 63 minutes last weekend, the West Country side had a far more comfortable time against their Scottish opponents, but a controversial red card for centre Bill Meakes looked to have turned the final on its head.

Meakes was shown a straight red from referee Jérôme Garces after a reckless high tackle on opposite number Sam Beard. The fact that the challenge was also off the ball and late probably led to the TMO Eric Gauzins recommending red instead of Garces’ initial decision for a yellow.

Meakes held his head in his hands as Edinburgh pounced immediately, scoring their only try of the match through hooker Ross Ford. Scrum-half Sam Hidalgo-Clyne’s conversion and the man advantage made a Scottish victory more of a probability than possibility.

Edinburgh had their chance but could not take it when it arose. Their superior numbers ensured they spent more time in the Gloucester than they had mustered at all in the first half. But hugely impressive Gloucester defence forced crucial errors from the Scots and they miraculously held on for victory.

The crucial cogs in the Gloucester juggernaut were driven by captain Billy Twelvetrees – who scored a superb first half try – and Greig Laidlaw; the scrum-half kicking 14 points to ensure that the trophy would be touched by at least one Scottish hand.

Edinburgh coach Alan Solomons said post-match: “I thought we were back in it. They looked to be struggling, we were on the attack inside the 22 but we gave away a penalty at the breakdown. It’s the little things that make the difference in finals.”

Gloucester director of rugby, David Humphreys said: “We played very well in the first half. Coming into the game we talked about creating pace in the game and not letting Edinburgh settle. We did that at certain points, we were a tap-tackle away from probably making it very difficult for Edinburgh to come back in to the game.”

View official highlights via the image below, or you can watch a full match replay on page two. 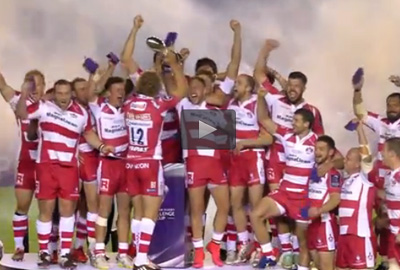