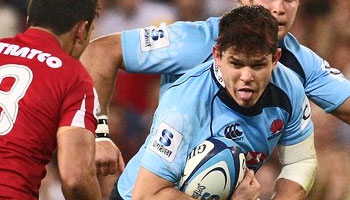 This week Waratahs back Tom Carter has taken a lot of flack for his onfield antics against the Reds shortly before they pulled off that last-gasp win in Sydney. Both Digby Ioane and pundit Greg Martin haven’t held back in response.

As you’ve probably seen by now, the Reds scored a late try through Dom Shipperley to defeat the ‘Tahs 25-21 after having trailed 21-18 with time up.

Carter, who has a bit of a history of being fairly vocal on the field, reportedly had a go at Ioane as he lost possesion, seemingly giving the win to the home side. A few seconds later, and it was Ioane celebrating, leaving Carter, you guessed it, Red faced.

“The game is not over until it’s over,” Ioane said. “You don’t yahoo like that when there are still 30 seconds to play. I couldn’t believe the way he was carrying on.”

Former Reds player and now commentator Greg Martin also had a go at Carter, airing his views on the Fox Sports show The Back Page. He stated that Carter ‘copped what he deserved’, going on to say that ‘he’s probably well-liked by his teammates, but that’s about it.’

Obviously Carter was totally pumped up and is competitive to the nth degree – and there’s nothing wrong with that – but in this case a little humility would have gone a long way, probably something all players should take note of, at all levels. Karma and all that.

You can view what Martin said on the show in the clip below, and there’s another amusing video going around that also features Carter’s antics, so you can watch that here.