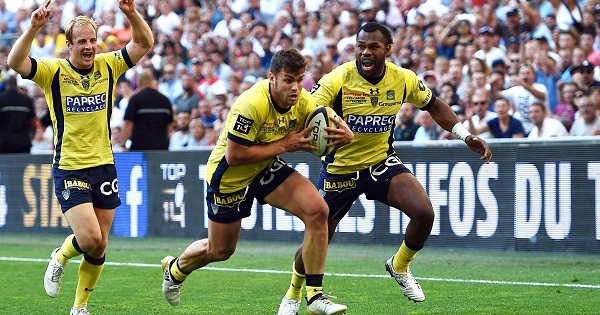 Damian Penaud made his long-awaited return to action from injury last weekend as Clermont Auvergne comfortably beat Pau 38-14 at the Stade Marcel Michelin.

It was a welcome comeback for the centre (son of former French fly-half Alain), who missed his national side’s 6 Nations assault due to a fractured foot in the winter.

Penaud was certainly back to his best on Saturday, producing the stand-out performance of the weekend by finishing off a fantastic team effort and setting up Nick Abdendanon in the second half.

The 21-year-old almost had a second score as well, having brilliantly scythed his way through would-be Pau defenders, only to lose the ball over the line and be denied by a brilliant last-gasp tackle from Bastien Pourailly.

His first score however was a perfect indication of his collaboration with Rémi Lamerat. The centre pairing are arguably the first-choice picks for the French national squad and, injury permitting, will travel to New Zealand with the team in the summer.

Penaud is evidently one for the future for France and much is expected of the Brive-born youngster. The former Clermont Academy squad member, who has five caps for France caused a myriad problems for the visitors in attack and should be a mainstay in Jacques Brunel’s future plans.

Clermont’s fortunes were given another shot in the arm by the return of prolific centre/wing Wesley Fofana who came off the bench in the second period.