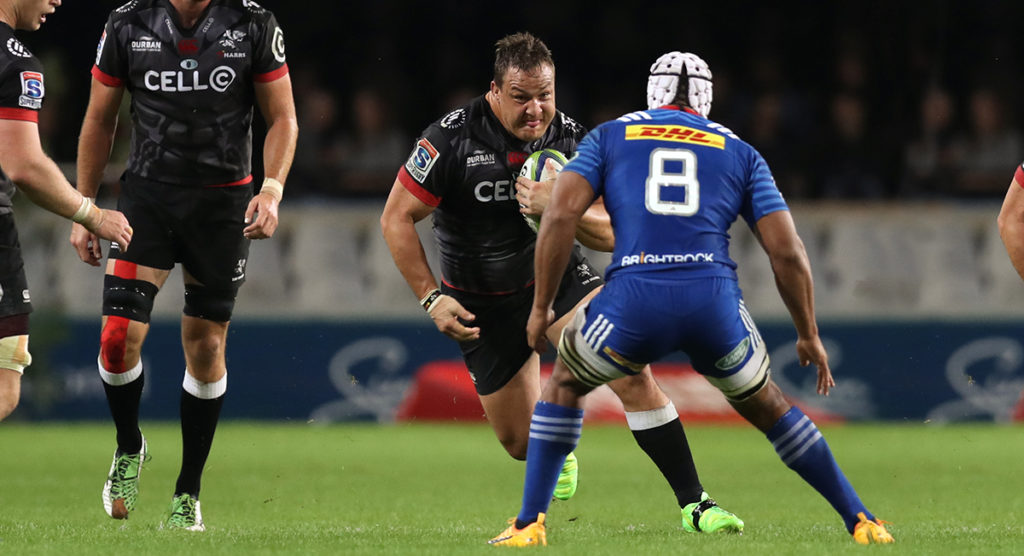 Sale Sharks have signed yet another South African powerhouse, today announcing that Springbok prop Coenie Oosthuizen will follow former teammate Lood De Jager to Manchester, joining from the Durban based Sharks at the end of the Super Rugby season.

Sale Sharks Director of Rugby Steve Diamond continues to bolster the Sale Sharks pack ahead of the 19/20 Gallagher Premiership season as Oosthuizen is the latest in a stream of impressive signings after they recently signed 6ft9 Springbok Lood de Jager.

The 30-year old prop has signed a three-year contract and will join Sale Sharks from the Cell-C Sharks after the conclusion of the 2019 Super Rugby season.

Oosthuizen started his career in Bloemfontein with the Toyota Cheetahs, playing in both the Currie Cup and Super Rugby for his home town club along with De Jager. He went on to make 129 appearances in all competitions for the Cheetahs and the 130kg prop ended the 2010 Currie Cup season as the club’s top try scorer.

Coenie quickly established himself in the professional game as a dynamic player with exceptional speed and agility for his size. After a stand out season in 2010 he was selected as part of the Springbok squad to tour Europe in November of the same year but did not make his international test debut until 9th June 2012, starting against England in Durban.

He has since gone on to win a total of 30 caps for the South African national side.

After seven years in Bloemfontein and talk of the Cheetahs being cut from Super Rugby, Oosthuizen left in 2016 to join the Cell-C Sharks on a four-year deal. He has made a total of 33 appearances for the Durban based franchise to date.

Diamond was pleased to announce the signing this week:

“Coenie joining us, along with Lood is a huge statement of where we want to be. He is 130kg, can play on both sides of the scrum and has a skillset away from the set piece that is unique for a prop of his size. He also has considerable experience playing with Akker Van Der Merwe at the Sharks so I think he will fit in perfectly at Sale.

“We look forward to welcoming him to Manchester later in the year ahead of the 19/20 Gallagher Premiership.”

Hard running Oosthuizen has become a fan favourite for moments like when he scored two tries and knocked out Jack Lam, in particular. He’s sure to be popular at the Sale Sharks.