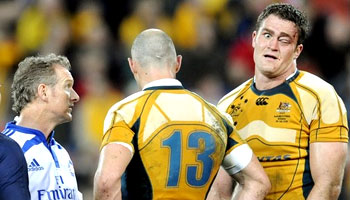 French forwards Renaud Boyoud and Imanol Harinordoquy have been suspended for three weeks for ugly punches on Wallabies second-rower James Horwill at Suncorp Stadium. Horwill was sent to hospital for scans on his eye socket after being struck by both Boyoud and Harinordoquy during a wild first-half brawl in the Wallabies 40-10 win last night.

English judicial officer Christopher Quinlan handed down the sentences, to commence from the start of the French season on August 1, after both pleaded guilty to striking .

Number eight Harinordoquy threw a flurry of upper cuts at the Australian lock after he ran in to assist Wallabies hooker Stephen Moore who was in a scuffle with French flankers Matthieu Lievremont and Fulgence Ouedraogo.

Tight-head prop Boyoud then landed a heavy punch that Horwill, who will visit an eye surgeon tomorrow, first feared had broken his eye socket.

“I just went in to give Squeak (Moore) a hand and there was a flurry of punches and I stood up and turned the wrong way and just copped one from behind and my eye swelled up and couldn’t see out of left eye,” a heavily-bandaged Horwill said today.

Ironically, the Australian was penalised by New Zealand referee Paul Honiss on the advice of his touch judge for inciting the brawl by running to the aid of Moore.

“Squeak had two guys on him and there was a guy around his neck so I was just trying to get him off and help him off,” Horwill said. “I’m not sure why it escalated.

“That’s footy, it’s not the first black eye I’ve got and won’t be my last in my Test career.”

Quinlan found Harinordoquy threw deliberate and repeated blows to the head of Horwill while Boyoud was found to have struck Horwill once but it was a significant blow, struck from behind.

UPDATE: Horwill talking about the incident on Fox Sports later