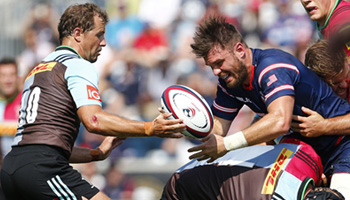 The United States hosted Harlequins this past weekend in a World Cup warmup match in Philadelphia. The experience of ‘Quins paid off in the end, as they prepared for the upcoming Premiership season, while the Eagles get ready for Pool B at the RWC.

The visitors scored three tries to the two of the hosts, as flanker Luke Wallace scored a brace.

The USA scored a lovely try after a neat break by flyhalf AJ MacGinty, but they couldn’t contend with the Harlequins power up front, particularly from the rolling maul.

Not too much should be read into the 24-19 result, however the USA will need to lift as they face far stiffer competition later this month, as South Africa, Scotland, Samoa and Japan wait.

“We’re playing the game in the right parts of the field, we’re clearing pressure well,” Eagles Coach Tolkin said. “We’re getting opportunities. That’s been pretty consistent with us this summer, but we have to work hard to make those opportunities count.

“Guys got some good mileage under their belt. That’s a big part of going into the World Cup. We’re going to be hit with obstacles and you have battle through them. And that experience today helped us grow a little bit.”

The Eagles host the Wallabies in Chicago next, another tough test ahead of the tournament.

In related news, former USA skipper Todd Clever, now out of favour with the current USA Eagles coaching setup, has been called up to play for the Barbarians. They face Worcester Warriors next weekend. The BaaBaas will be coached by Carlos Spencer.

Highlights below, and you can view the full match on the next page