Hitoshi Ono suspended for reverse headbutt against the Brumbies 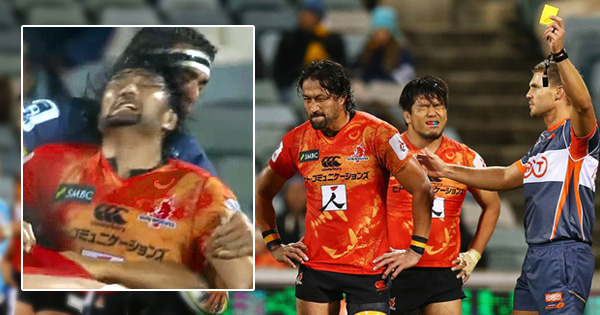 Sunwolves lock Hitoshi Ono has been banned for a week after he was yellow carded for a quite unique reverse-headbutt against the Brumbies at the weekend. Ono plead guilty to contravening Law 10.4.a. Striking with the Head during a SANZAAR Judicial Hearing.

The veteran Japanese forward, now 38-years-old, was trying to get some momentum in the maul, but it appeared that he attempted to shrug off the attention of opposite number Rory Arnold.

He made contact with the head more than once, leading to the card and citing.

In the hearing Ono and his legal team explained that there was no intention to strike the Brumbies player, but that ‘the motions he engaged in with his head were part of his body movements to assist the driving maul’.

He did however accept that his conduct was reckless and there was a risk of injury.

“Hitoshi Ono is currently the most capped Japanese player (96 caps). He has a remarkable disciplinary record in that he has not been cited or received a red card before this. He is a leader in his club and for his country.  He appears to have an exceptional disciplinary record,” said the SANZAAR statement.

“I considered that the appropriate entry point for the conduct was low end, and an entry point of four weeks was appropriate,” explained SANZAAR Duty Judicial Officer Michael Heron QC.

“I considered that Ono san should receive at least the maximum discount of 50% given the factors above.  Further to that, I considered that a suspension of two weeks would be wholly disproportionate to the conduct involved, accepting that this was reckless behaviour and not intentional use of the head.

“In particular the player’s exceptional disciplinary record made it very unlikely he would intend to strike another player with his head.  The statement from the referee supported that. Taking all that into account, I reached the conclusion that a suspension of one week was appropriate.”

Ono received a sanction of one week, with his next scheduled match being Japan v Canada on 11 June 2016. Consequently he is suspended up to and including Saturday 11 June 2016.