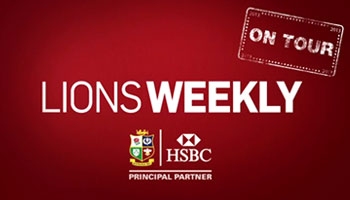 The latest HSBC Lions Weekly reflects on the win over the Reds and looks at things from a Wallaby point of view as legends Nathan Sharpe and George Gregan share their thoughts on performances, regrets and mind games.

After three tour games the Lions remain unbeaten, but the challenge gets tougher from here as a short turn around time and increased intensity means the squad will be stretched to their limits.

There is little time for the players to reflect though, as the next midweek team has already been chosen (see below), and focus shifts to Newcastle on Tuesday, where they will be facing a Combined Country team, which comprises of Queensland and New South Wales players.

Before that, Lions Weekly reflects on the two games played on Australian soil, and we get to hear from Wallaby legends Sharpe and Gregan, who share their views on all things Lions.

“Leigh Halfpenny is one of the best kickers in world rugby. I really like his technique,” said Sharpe.

“It didn’t surprise me as he kicks really well for Wales and clearly if he’s in the test team you’d expect him to be the kicker.”