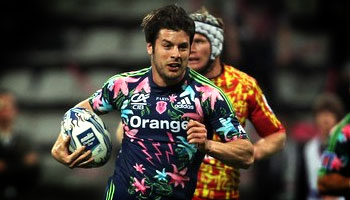 Stade Francais came back from being 16-0 down to take a narrow 32-28 victory over Montpellier in their Amlin Challenge Cup quarter-final on the weekend. They progress to the semi final, where they will face rivals Clermont Auvergne.

The Paris side scored four tries as both teams played some highly entertaining rugby in an open, free flowing game. One was a penalty try, while the others were scored by Hugo Southwell, Tom Palmer, and Antoine Burban.

Southwells was probably the pick of them, with a runaway solo effort after Montpellier had built up an attack with some great interplay, before coughing the ball up.

One of the best parts of the try was actually the reverse-flick-pass by Montpelliers number eight, Marc Giraud, before possession was lost. Scotlands Southwell then streaked away, showing good pace and beating the last man nicely.

He nearly scored again later, following a great chip and chase, but his foot was out.

Stade Francais will face Clermont in the semi final, and ironically have them next in the Top 14 too, something thats bemused assistant coach Chris Whitaker.

“We play them this weekend and then in two weeks’ time in the Amlin again.

“It was the same with Montpellier as we played them two weeks ago as well. It’s worked out a little bit funny and it is a strange one,” he said.