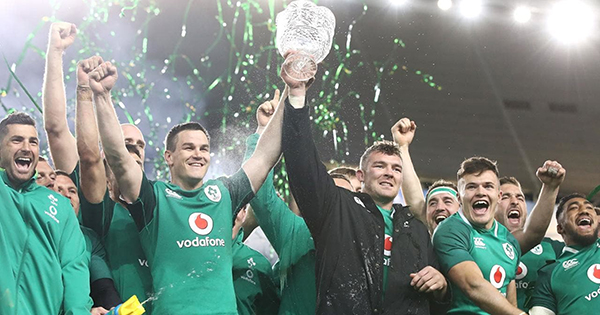 Ireland are looking forward to a bit of a break after capping off a sensational season with their first win in Australia since 1979, as they beat the Wallabies 20-16 in Sydney to go 2-1 in the three-Test series. This follows their Six Nations Grand Slam earlier in the year.

Deserving of their current world ranking of 2nd, Ireland had Johnny Sexton to thank for 15 points with the boot, after both sides scored just a try apiece, both after halftime.

Jacob Stockdale was yellow carded for an elbow to Nick Phipps’ throat before Israel Folau was also sin-binned after he appeared to get himself in a position to catch the ball, but then pulled down the Irish jumper.

“Some things didn’t go for us. You need a few things to go for you in a game,” Australia coach Michael Cheika said. “It could have gone either way. It was pretty tight. It was an electric atmosphere.”

“Tough, tough to watch that,” said Schmidt. “They just kept coming wave after wave, I thought they were super in that second half and I thought it was a super effort from our guys to hang on in and keep them out.

“They came in waves, the speed they came on to the ball, it was really hard to keep them off our advantage line, so once they started getting that momentum they were even harder to contain.

“It’s a credit to our guys for hanging in there and it is probably a credit to the Wallabies, because I thought they did a fantastic job of carrying incredibly well.

“I’m pretty pleased there is not a game next week – that might have been a bridge too far.

“I think they [Australia] are a super team. To be in their back yard and manage to sneak off with the Lansdowne Trophy is a little bit special for us, especially on the back of a pretty long season.”

In a tight series, both teams scored 55 points each, but it was Ireland who leave victorious for the first time in 39 years, earning themselves a nice break before they head to Chicago to take on Italy.

The real question, of course, is if Ireland can build on this success and take it into the Rugby World Cup in Japan next year. A lot will happen before then, but this outstanding season sets them up nicely, and their solid position of second in the world rankings won’t hurt their confidence either.