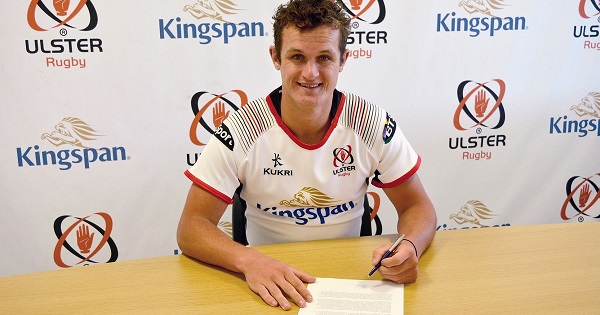 Billy Burns could be set for an international career with Ireland after penning a deal to play for Ulster for the coming two seasons.

Arriving from Gloucester, where he made his senior debut as a 17-year-old, Burns qualifies for Ireland through a grandparent on his father’s side and has picked Ulster as his route to the green jersey.

Ulster had been on the look-out for a fly-half for some time, having failed to sign All Black out-half Stephen Donald and missing out on bagging Munster-bound Joey Carbery.

The province were also looking to replace Paddy Jackson, whose contract with the club was terminated in the aftermath of the Ireland internationalist’s rape trial – after which he was acquitted.

A former England Under 18 and 20 player, Burns has a degree of international experience and has performed well in the Cherry and Whites in the last year. However, the West Country outfit’s decision to sign Danny Cipriani left Burns looking elsewhere.

Burns said: “This is a great opportunity for me to take the next step in my career and I’m very grateful to Gloucester for supporting me in this decision.

“The Ulster squad is brimming with established and developing talent, and it will be exciting for me to challenge myself in a different environment.

“I’m really looking forward to linking up with the squad next week and getting stuck into pre-season training. Hopefully I can show the Ulster supporters what I’m all about and contribute to the team in what is a hugely important season.”

Whether Burns will indeed get to play for Ireland, and that ultimately depends on form and coach preference, remains to be seen. One thing for sure is that both Burns and Ulster need each other this coming season.

Burns’ arrival may also spark another debate. The thorny issue of so-called “project players” could raise its head if and when Burns is considered. It is an aspect of international rugby that has led authorities to increase the number of years required to qualify under residency rules.

Burns is different in that he qualifies straight away, but will the IRFU be so quick to hand him a test berth with the union rearing Academy players for the same role via its provinces?

Carbery is a classic example of an out-half ready to be handed the keys to the shop when the mercurial Jonny Sexton calls it quits. The Leinster man was linked to both Ulster and Munster, with the latter club winning that battle. There seems a plethora of young Irish Academy talent coming up through the ranks, so Burns in a green shirt is by no means a shoe-in just yet.

But Ulster’s Operations Director Bryn Cunningham believes there could be room for Burns: “We’re delighted that Billy has signed with us for the next two seasons.

“Billy has an impressive range of skills and has gained a considerable amount of experience for an out-half of his age. Importantly, being Irish-qualified, we have no doubt that Billy has the potential to represent Ireland in the near future.”

Most importantly for Ulster, and Ireland head coach Joe Schmidt, Burns will team up with inexperienced fly-half Johnny McPhillips, who was left as the only established Number 10 in the squad at the back end of last season.

Do you think Billy Burns can work his way into the Ireland squad?