Jacob Stockdale picks up Player of the Championship after breakthrough campaign 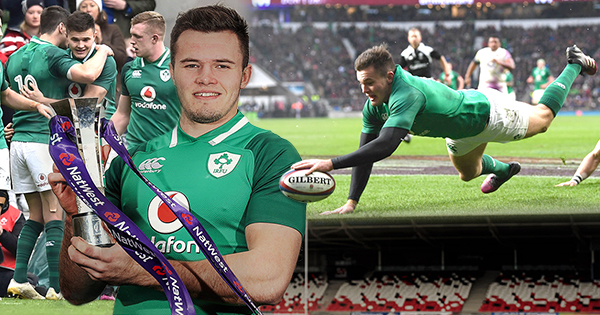 Ireland winger Jacob Stockdale has been named 2018 Natwest Player of the Championship following a record-breaking campaign that included seven tries and a Grand Slam. Stockdale secured the majority of fans’ votes.

The Ulster star scored against England, Italy, Scotland and Wales during this year’s Championship, eclipsing the six tries set by Chris Ashton, Will Greenwood and Shane Williams.

Playing in the Ulster Bank League with Ballynahinch RFC as recently as 2016, Stockdale’s progression has been incredible and his meteoric rise continues to gather pace with this prestigious accolade.

The 21-year-old was a clear winner in the public vote, securing 32% of rugby fans’ votes.

The NatWest Player of the Championship shortlist was selected by a media panel of distinguished rugby writers and broadcasters from across the six nations.

Each member of the panel submitted their top three nominations for the award, from which the six players with the most number of votes were identified for the shortlist. The panel were supplied with OPTA stats to assist their selections. The shortlist was open for public voting for two days.

Stockdale was surprised by Iain Henderson, who gave him the award in front of their Ulster teammates.