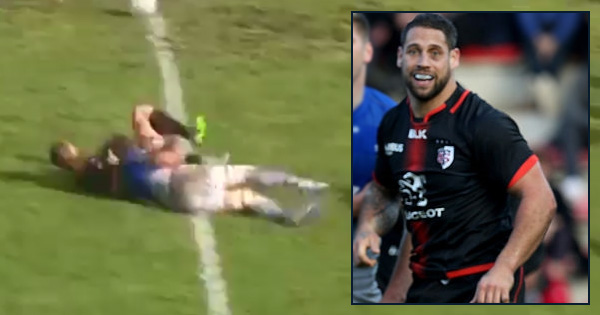 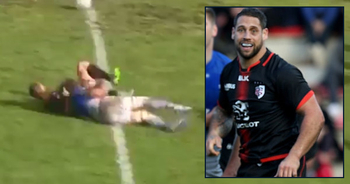 While we all love to see big, spectacular hits, there is something special about seeing a beautifully executed, technically perfect tackle. And while Jacques Burger is not often known for his finesse, this tackle is right up there as one of the best we’ve seen this season.

Note how Burger wasn’t even watching the ball, but instead lined up Toulouse flyhalf Luke McAlister from his position at the back of the lineout, and never took his eyes off him. Remember all those hours you spent with tackle bags?

A few months back Burger told The Guardian all about his mindset and abilities when it comes to tackling, and stressed that it isn’t only about brute force if you want to be effective.

“It’s one thing to try to smash people left, right and centre but there is a lot of skill that comes into it too,” the Namibian kingpin said.

“You have to know when to come off the line. When to go low. When to go for the ball to prevent the offload. All those decisions you make in an instant. The more you play, it just kind of happens.

“But while a coach can tell you where you should be positioned, at the end of the day you have to have the mentality that you want to hit somebody. If you want to make a big hit, there has to be no fear. And I don’t have fear on a rugby pitch.”

We’ve seen that lack of fear on display many times throughout his career, despite the fact that at 6ft2, Burger isn’t one of the biggest men out on the field by any means.

“Even the backs are bigger than me these days. They are all so massive. The game is getting bigger and bigger. But, if a guy runs at me – whatever his size – I will try to hit him as hard as I can. That’s something you have to want in your soul. It’s something you can’t teach,” he explained.

The tackling has no doubt taken it’s toll on him though, and at 32-years-old the veteran of three World Cup’s recently decided to hang up his Test rugby boots.

“You can’t get out of bed. Everything hurts. It feels like you have been in a car accident. You tell yourself you won’t be able to train the following day. Yet you always do. Rugby is a brutal game but I wouldn’t change it for the world. I love it.”

So while this tackle on McAlister was far from the biggest or most eye catching, it was fantastic to watch and fully sums up everything Burger, one of the toughest men in the sport, is all about.

There was a nice little exchange between McAlister and Burger on twitter following the match. 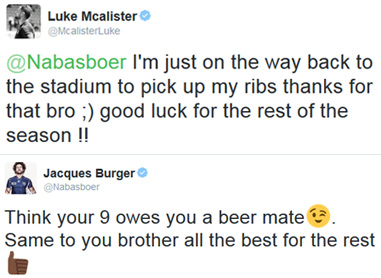