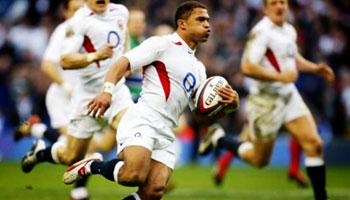 World Cup winner Jason Robinson recently announced that he is to come out of retirement to play rugby for Flyde, a team three tiers below the Premiership. Today we get a chance to relive the Robinson magic, as we take a look back at a great try from 2004.

After retiring in 2007, Robinson had a stint at coaching with Sale last season, and within only three months of being head coach at the club, hes shocked the rugby world by announcing that hell be playing for Flyde, a team that compete in National League Two North.

Robinson will be joining former England coach Brian Ashton, who himself has recently returned to the club as a coaching consultant. A star in both League and Union, 36 year old Robinson is keen to lace up the boots again and get out there.

“This is not a publicity stunt for me,” he insisted. “If I wanted to I could have gone on and played in the Premiership. I know I am going to be a marked man and I am sure the opposition will be looking to see if they can put a big shot on me. That is all part of the game. My body is in good shape and if I didn’t think I could do anything, then I wouldn’t be wasting my time here.

“I said I would never get into coaching and last season with Sale reaffirmed the reasons why. It was stressful and it opened my eyes to a lot of things. Some people you think you know and some people you are surprised with, but all in all it was a great experience.

“But I don’t want to have certain pressures upon me and the role I am taking up now will be more about me and what I can deliver rather than other people.”

Coach Ashton said stated that Fylde have signed ‘the best full-back in the country’.

“Rugby is not a one-man game but if there is any player that I have ever dealt with who can galvanise a whole team then it is Jason Robinson,” Ashton said.

Heres a great try from 2004 when Billy Whizz scored a hat trick against Italy, earning him the man of the match award on the day. He may never reach those heights again, but one thing is certain the attendances at Fylde home matches are sure to rise with Robinson on the park.