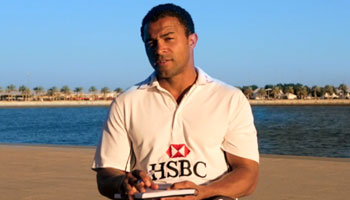 With the British & Irish Lions squad announcement less than two weeks away, on 30th April, HSBC Ambassador and Lions legend Jason Robinson has now selected his starting XV for the Test series against the Wallabies.

The former dual-code international was impressed by what he saw in the Six Nations, subsequently naming a side that features eight Welsh internationals, and an all Welsh backrow.

He’s gone with Leigh Halpenny as a starter, but on the wing rather than fullback, opting for Ireland’s Rob Kearney instead. In the midfield he’s gone with what could be a lethal partnership, as he’s named Manu Tuilagi and Brian O’Driscoll, with the latter as squad captain.

If you’re wondering about the scenery, Robinson was speaking from the HSBC Rugby Festival Doha.

As the tour approaches, what do you think of the team he has selected?