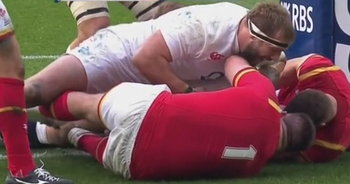 Joe Marler has been clearedto play following a disciplinary hearing for the incident that involved him striking Wales’ Rob Evans during their Six Nations match at Twickenham on Saturday. While the citing was upheld, it was found to be not worthy of a red card.

Marler has been in all sorts of hot water this week following not only this incident, but one that has caused a bigger stir, when he insulted Wales prop Samson Lee. The outcome of that investigation is yet to be revealed, but you can be sure that the comment won’t be taken lightly.

WATCH: Highlights of England vs Wales »

As for this citing, he appeared before a disciplinary committee in London today after having been cited for striking an opponent under Law 10.4(a) Punching or striking. A player must not strike an opponent with the fist or arm, including the elbow, shoulder, head or knee(s).

Harlequins prop Marler accepted that he had committed foul play.

The disciplinary committee considered all the evidence and upheld the citing. However, they found that the offence would not have warranted a red card, so imposed no sanction.

You can see two angles of the striking incident below

Typical Marler behaviour… Not content playing for his country, has to resort to skullduggery @EnglandRugby pic.twitter.com/VwIO6QNW2e