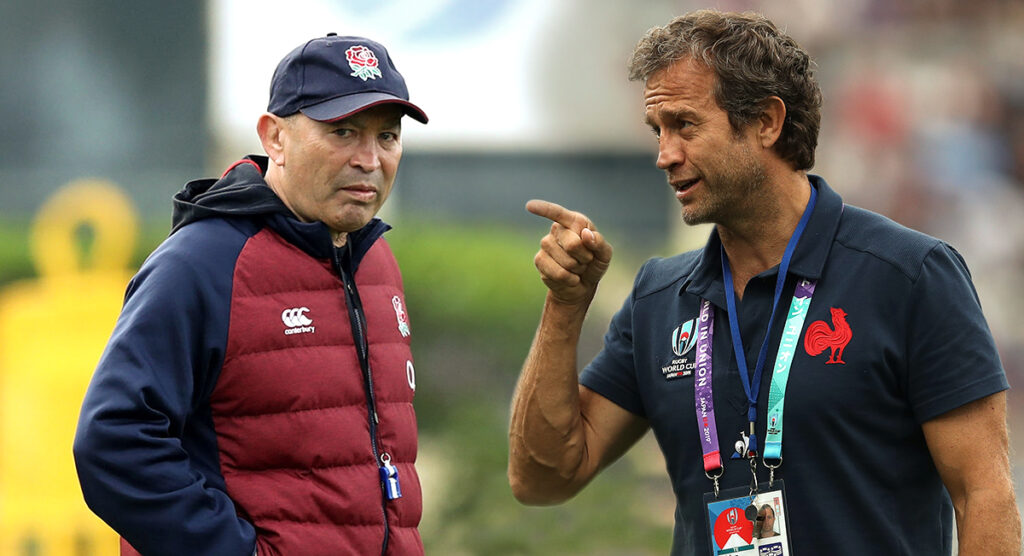 This weekend’s 6 Nations clash between France and England is perhaps the most eagerly anticipated in recent years, and the two coaching set-ups have been firing missiles towards the other ahead of “Le Crunch”.

England head coach Eddie Jones kicked things off in typical Eddie Jones fashion by claiming that France’s vastly changed squad may already be on the back foot due to their lack of physical tests at club and age level.

“We don’t know but it’s going to test those young players because they will have never have played against a brutal physicality and intensity that we are going to play with on Sunday.”

When quizzed about this in their own press conference, French coaches Fabien Galthié and Raphaël Ibañez not only refuted Jones’ claims but hit back in style.

“But we must remember that the English coach and us have one thing in common, we’re all in the stands. And it’s very easy to say things [like that] when you are in the stands.”

Galthié was equally unfazed by Jones’ teasing and added: “we’ve been in rugby for nearly 30 years and we are used to hearing these sorts of little phrases. They have promised physicality and it’s up to them to keep that [promise].”

RELATED: The French rugby team have selected an incredible backline that could defeat England

There’s no doubt that a lot of what Jones says in his press conferences is delivered with the intention of causing a stir, whether for the opposition, the media or simply for Jones’ own enjoyment. But there is something in what he says about the inexperience, if not the physicality element.

Anyone who has watched a second division French league (Pro D2) or even a lower league Féderale match will testify that physicality is definitely not lacking for most players. But the cut and thrust of international Test rugby is the part that is missing from the new squad.

That’s not to say that the French are not ready, and a lot of what Galthié and Ibañez reiterate in their dealings with the press focuses on the development of the youth ahead of their own World Cup in 2023.

England on the other hand, experienced the same thing back in 2012 when Stuart Lancaster rang wholesale changes to the previous 2011 World Cup squad, giving the likes of Owen Farrell, Billy Vunipola and Chris Robshaw the opportunity to develop.

France is however, a different kettle of fish of course, but as Squidge Rugby brilliantly explains in this video below, 2020 could well be a turning point.