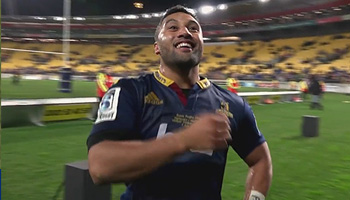 There can be only one! Josh Kronfeld celebrates with Super Rugby champions THE HIGHLANDERS

This video from The Crowd Goes Wild shows former All Black and Otago Highlanders flanker Josh Kronfeld on hand at the Super Rugby Final, and celebrating with the team after their famous win over the Hurricanes.

It’s great to get so close to the celebrations, with some classic quotes from some of the players. Lima Sopoaga in particular was incredibly pumped up, chanting about how nobody believed the Highlanders could do it, and that they’ve made them believers.

Aaron Smith, who was outstanding on the night, said that all the doubters acted as fuel, while Joe Wheeler, who we last saw with a half naked man on his lap, spoke about golden showers.