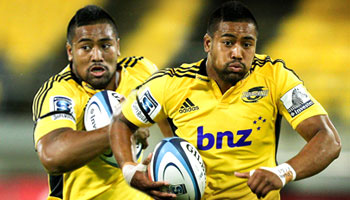 Julian Savea scored two fantastic tries against the Waratahs on Saturday as the Hurricanes powered to a 41-29 victory at home. Power is usually the name of the game with Savea, but the rookie’s second try showed that he has plenty of skill too.

Round 8 of Super Rugby featured some great tries and dramatic finishes, but for many Savea’s bit of skill is what stood out as one of the magic moment’s of the weekend.

Last month we saw the young All Black smashing the Crusaders all over the park, including putting in a big tackle on Robbie Fruean, and bouncing off Israel Dagg on the way to the tryline.

Against the Waratahs he kept up that form, scoring a great try in the first half as he easily outsprinted Wallaby Adam Ashley-Cooper after Conrad Smith put him into space.

In the second half he scored again, this time chasing a kick ahead that bobbled around before he swooped on it and snatched it from three Waratahs players. At full tilt he managed to grab it and swerve infield, almost side-stepping the players, before he even had the ball.

Great players make the impossible look simple. At this stage, with 12 Test tries in just 9 matches, and making this kind of impact each weekend, Savea is looking like the real deal.

View all the match highlights, including his first try and a superb prop try by Reg Goodes, here.
All Round 8 Highlights can be viewed in our archived Super Rugby section