Kevin The Tipster - New Zealand vs France - The Final 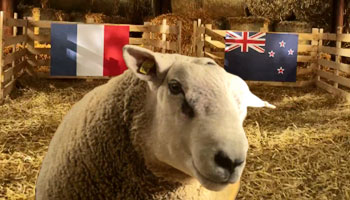 Kevin the Tipster, the results predicting sheep, has had a pretty good run so far in the RWC. A 90% success rate includes correct predictions for both Semi Finals, so today he’s had a go at the final.

You can watch the video to see who the Tipster goes for, as he aims to add to his very impressive 35 from 39 correct predictions. We can tell you though that Paddy Power have already paid out over £600,000 in winnings for those who bet on New Zealand to beat France in the final.

That’s right, according to them, the tournament is as good as over, so they’re not wasting any time. “New Zealand has left all of their opposition so far feeling All Black and blue and it’s inevitable us bookies will be taking a hammering from them on Sunday too so punters may as well collect now,” said their head honcho.

Last weekend Paddy Power refunded Welsh punters to the value of over £200,000 following the sending off of Sam Warburton. All losing bets were scratched as they felt the call was wrong.

The All Blacks were pre-tournament favourites at 4/6 while France were available at 16/1. A final between the two sides was at set at 11/2 and France, heavy underdogs at this stage, are now at 6/1 to pull off another famous upset.