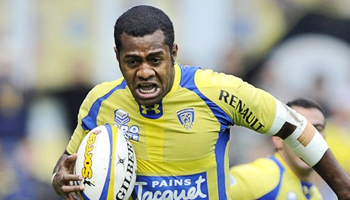 Three Fijians and a Scotsman combined brilliantly as Clermont scored one of the tries of the weekend in the Top 14, despite going down 30-19 to Castres. Both sides are still in the playoff race, with Castres looking likely to go ahead of Montpellier next weekend.

It was only Clermont’s fifth loss of the season and they once again provided great value, including this fantastic try that was started way back behind their own tryline.

It started as Jason White received some of his own medicine, forcing Seru Noa Nakaitaci to clean up the mess and attack from deep. Another Fijian, All Black Sitiveni Sivivatu, showed that he’s still got it with a great break up field before combining with a number of players.

One of those was Scotsman White, who got up to be in support and handled excellently, then later provided the scoring pass for fullback Kini Murimurivalu.

Each side scored three tries, and by kicking the game’s opening penalty, Castres fullback Romain Teulet became the first player in world rugby to score 3000 points for a single club.

Below is the try, and you can view full highlights of Castres vs Clermont here