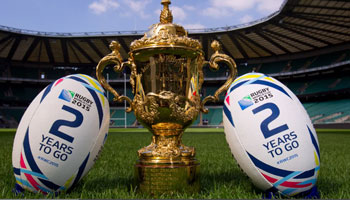 Tournament organisers England Rugby 2015 Limited (ER 2015) and tournament owners Rugby World Cup Limited say that they are on track to deliver a great event. The RWC is one of the biggest sporting events on TV with audience figures expected to reach in excess of four billion.

There will be a total of 48 matches played, with 20 nations competing over 44 days.

Dallaglio also appeared in a video released by the IRB today that features he and ER 2015 Chief Executive Debbie Jevans discussing all things #RWC2015. You can view that below.

“As we move into 2014 we begin to fully engage and mobilise our plans with the launch of the volunteer programme, international Webb Ellis Cup tour and tickets going on sale,” Jevans said.