Lead up to the First Test - The Lions Story so far 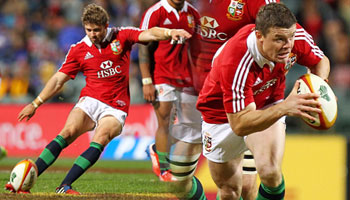 We’re all set to go in Brisbane as the Wallabies host the Lions in the first Test on Saturday. The jersey presentation took place earlier, with Sam Warburton saying that it’s the biggest moment of his career. Here’s a quick look at the tour so far.

They were five from five this year before their loss to the Brumbies, but are in confident mood and despite a few injuries, have a good mix that are certainly capable of beating the Wallabies.

Captained by Sam Warburton, the Lions also have the experience of former captains Brian O’Driscoll and Paul O’Connell to call on when the going gets tough, and have plenty of fire power out side, with George North in particular one to watch.

Warburton and the rest of the matchday squad had the honour of receiving their jerseys from none other than Lions legend Sir Ian McGeechan.

“I have been thinking about Saturday since I was 14-years-old. It will be the biggest moment of my career, without a doubt,” said Warbutron as he reflected on receiving the famous jersey.

“I found myself kissing my Lions jersey the other day as I was packing it up for another flight. It was the one I wore for the first half of my debut against Queensland Reds.”

A quiet captain that leads from the front on the field, Warburton has revealed that he’ll leave the pre-match inspirational stuff for some of the more vocal leaders amongst the group.

“I usually sit down on the bench and listen to my music, and I let the louder members of the squad be more vocal in gearing the boys up. So tomorrow, guys like Paul O’Connell, Brian O’Driscoll and Alun Wyn Jones will be doing that.

“I let them have their input and then I will finish things off just before we go out.”

Below is an excellent look at the tour so far. View the teams for the first Test here