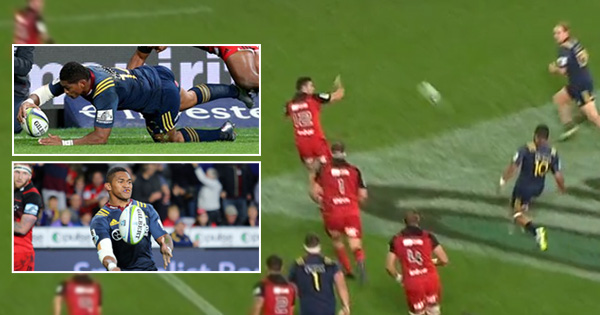 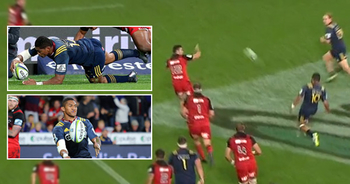 The Highlanders beat the Crusaders in what was a thrilling game of Super Rugby in Dunedin. The New Zealand derby lived up to all expectations, and although the Crusaders had two early tries denied by the TMO, the Highlanders kept their composure to produce some fantastic rugby and claim the bonus-point win against the seven times champions.

One of the tries of the match was scored by brilliant winger Waisake Naholo, though he would be the first to admit that flyhalf Lima Sopoaga deserved the plaudits for the moment of magic.

The Test capped number ten was on target with the boot in front of goal, kicking three conversions and a penalty, but it was this crosskick that everyone will be talking about.

It was as flat as they come, almost a kick-pass, and it was perfectly executed, allowing Naholo to score the first of his two tries on the night. The timing was also perfect, after a sustained period of pressure from the Crusaders, when two tries were not awarded within minutes of one another.

The highly impressive Matt Faddes also scored a brace, before Liam Squire scored in the 71st minute to help the defending champions to end the Crusaders’ eight-match unbeaten run.

The Highlanders had led 20-12 at halftime, and ended with a 34-26 bonus point victory in front of a capacity home crowd.

Thanks to everyone who showed up tonight was an amazing buzz out there. #LandersArmy. Have a safe night everyone. #YaBoySops

See the try below, and full highlights wrap lower down on the page. If you have a chance to watch the full match replay of this thrilling match, we highly recommened it!