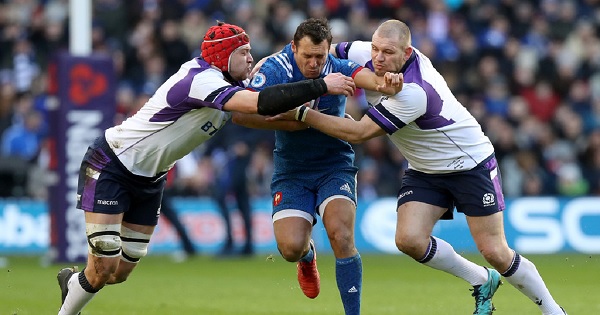 Lionel Beauxis made his first start for France since 2012 at the weekend in his side’s 32-26 defeat to Scotland in the 6 Nations, and produced a predictably unpredictable performance as only the stand-off could.

The Lyon out-half is a bit of an enigma in France, sometimes blowing hot, other times cold. But one thing is guaranteed with Beauxis, he is an intriguing player.

He settled right back into the #10 jersey he had been out of for so long and provided good direction and stability for a side desperately looking to nail down an out-and-out fly-half for the future.

The second half showed some of the negatives of Beauxis: a careless knock-on in the final quarter of the match from a poor Scotland kick and a silky reverse pass five metres from his own line which left full back Geoffrey Palis under enormous pressure.

Speaking to L’Equipe post-match, Beauxis admitted to “playing a bit too fast” while the French daily announced “We found a Lionel Beauxis loyal to himself. A bit disconnected from reality” and lamented his “Offloads to no-one and risky volley… putting les bleus under pressure”.

While Beauxis’ overall performance was far from terrible, the selection of the 32-year-old instead of up-and-coming Toulon player Anthony Belleau puts the spotlight on a larger issue for the French.

New head coach Jacques Brunel said at the start of the 6 Nations campaign that he wanted to change the way France played, and that the half-backs would be crucial.

He gave a debut to teenager Matthieu Jalibert in the opening round – only for Jalibert to go off injured – and has included Belleau among the replacements for both matches.

These two are arguably the future of France, provided they can remain uninjured. But while the talent has invariably always been there, questions are still raised about the management of the team.

Brunel said Beauxis was picked “due to his impressive kicking game” he has demonstrated with Lyon this season. The question many asked, including L’Equipe was: “If this was the case, why were kicking duties given to scrum-half Maxime Machenaud, and latterly his replacement Baptiste Serin?”

“Mystère!” exclaimed L’Equipe, and it really is.

In his tenure, Guy Novès used seven different combinations at half-back, some due to injury (Camille Lopez), though often only because none of the others seemed to work.

The good news is that Brunel probably has his ideal pair of half-backs now, in Dupont-Belleau and Parra-Jalibert/Lopez. The bad news is that of this quintet, four of them are out of action until further notice.

Once France can get a solid, regular half-back pairing and a 10 who will control and attack with moderation, les bleus can think about a true resurrection.

The good (and bad) of Lionel Beauxis

…spoilt by this botched volley in the return leg.