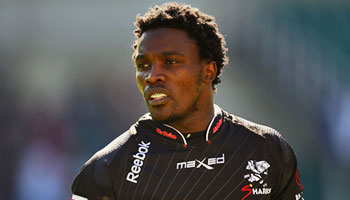 The Sharks beat the Brumbies in Canberra for the first time since 1998 as they came away with a 29-26 win despite a late fight back from the hosts. One of the tries of the match was this effort from the visitors, and speedster Lwazi Mvovo.

At 29-19 to the Sharks with ten minutes left, the game looked wrapped up but a late effort from Nic White had them scrambling, and the home crowd of Canberra on their feet. It looked as though it could be another last minute win, but the Sharks held them off and took the spoils.

“To be 10 points up with four minutes to go on the clock, you’d expect it would pretty much be game over, but we’ve seen in this competition what can happen,” said Sharks coach John Plumtree.

“I was just pleased to hear that final whistle,” he added.

It was the first loss for the impressive Brumbies this season, who despite an exodus of players and a change in management, have put in some great performances.

Young Jesse Mogg had scored a nicely taken try earlier, which could possibly have also been featured on here, but the try of the game was this scorcher from winger Lwazi Mvovo, who handled twice then streaked down field before turning on the afterburners.

The Sharks head to New Zealand next, to play the Hurricanes in round seven.