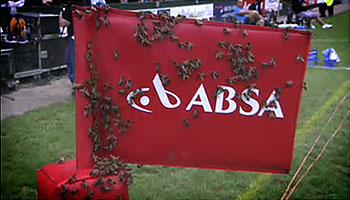 There was a quite bizarre occurrence in Durban earlier today as the kick-off for the first semi final of the Currie Cup, to be played by the Sharks and the Blue Bulls, was delayed due to a swarm of bees invading the field. This is a short report of the scenes prematch.

The players had run out onto the pitch in front of 40 000 expectant fans but it soon became apparent that a swarm of bees had been disturbed and it became unsafe for the game to continue. The game was delayed while a frantic effort was made to find the source and get rid of the bees.

Eventually the players, after standing around aimlessly for a good 5 minutes, went up the tunnel to relax in the safety of the change rooms.

Smoke machines and leaf blowers were used as clearly there was no resident beekeeper to be found. It was all a bit chaotic and a delay that brought back memories of the rain delayed 1995 World Cup semi final between the Springboks and France at the same venue.

Eventually things settled down and while some of the bees were removed manually, others were scared off with smoke, and the rest seemed to settle on small palm trees that were then placed on the sides of the field.

The game kicked off 40 minutes late, causing the second semi final to also be pushed back, but there was no sign of the bees again and not too much harm done, bar the occasional sting, and some very bad puns flying around the ground.