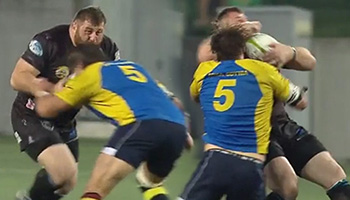 A few weeks back this huge collision took place in the final of the Ekstraliga, Poland’s top league for rugby. You may have come across it but we haven’t featured it yet, and it really is a must see hit. It’s been described as the 300kg clash, as these two giant men met in midfield.

The final was between two of the best teams in the league, Rugby Club Arka Gdynia and Budowlani SA Lodz. It was a close contest but Arka Gydnia came out on top, 24-19.

This tackle by Gdynia lock Mateusz Bartoszek, on massive prop Toma Mchedlidze, was clearly one of the highlights of the match. It looked a bit like gladiators colliding, as burly Mchedlidza, who looks like he spends his days chopping down trees while eating small children, took a well timed crash ball from his number ten.

Bartoszek was waiting though, and despite making the huge tackle, actually ended up in trouble, as the savage impact looked like it injured his arm or shoulder. Brutal.