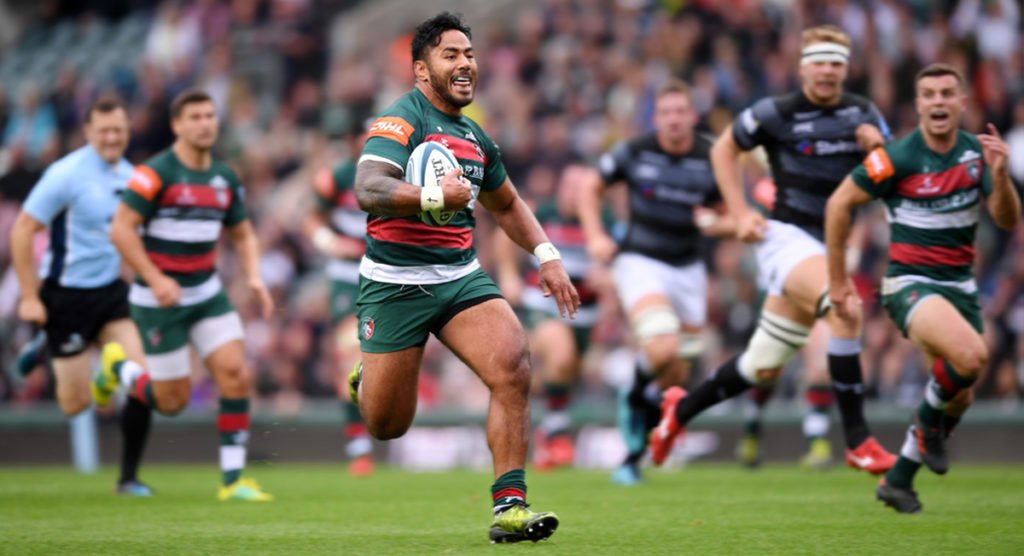 Manu Tuilagi got his season off to a bang, reminding everyone just how potent a weapon he still is. After getting demolished by Exeter in round one, then losing their coach, Leicester Tigers bounced back to beat Newcastle 49-33. Tuilagi’s bruising try has been voted the Premiership’s Try of the Week.

Frustrating injuries have certainly taken their toll on the massive centre, with many questions asked about his overall fitness and whether he will ever get another chance in the England shirt.

While Leicester fans were undoubtedly happy to get the win, they will be equally thrilled to see a healthy Tuilagi. Looking fit as ever, his performance went a long way in answering some of those questions.

Specifically, this try had all the hallmark characteristics of old school Manu – power and pace.

Tuilagi ran a great line to receive a short Kyle Eastmond pass inside their own half, and then quickly bounced two tacklers before outrunning the rest of the defence. It was a moment of brilliance between George Ford, Eastmond and of course Tuilagi.

“Manu is world-class in the lines he runs and unbelievably hard to stop. You could see today [what happens] if you put him a bit of space or give him a soft shoulder or a one on one,” said Ford.

“It’s exactly what he need to do – get him in those positions. We worked hard on that all week. We’ve got to do our bit on the inside, at 10 and 12, Kyle and I, to give Manu, Telusa [Veianu], Jonny the space they need.

“We’ve probably been paying (Manu) a bit of a disservice the way we’ve been playing him; telling him to run into brick walls all the time,” Ford admitted.

“Exploiting space is what we as players and Geordie want, because if you want to bring the best out of players like Manu, who is one of the most powerful line-runners in the world and one of the most difficult to tackle.

“You’ve got to put him in space and put him in on-on-one situations or even put him through holes in the defence on soft shoulders. So, it’s simplifying things, becoming better at executing things, running straighter, running good lines and holding guys up on the inside so Manu gets that half a hole.

“As you saw today, he’s pretty lethal when we get that right.”

Of course now there are the obligatory calls for Tuilagi’s inclusion in Eddie Jones’s England squad mini-camp at Bristol next Thursday. With runs like this, it will certainly give Jones something to think about.

The Rugby Pod guys had an amusing chat about Manu’s rampaging run, mentioning how scary he can be at his best. They also touched on another far bigger unit.