Marius Joubert hatrick against the All Blacks in 2004 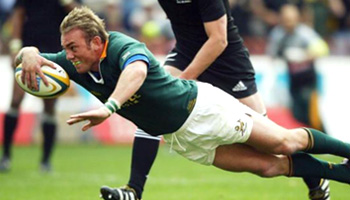 With the Tri Nations being the biggest thing on the go at the moment in the world of rugby, we’re randomly featuring matches from the past as we add to our comprehensive archive off the best bits from the game we love.

We’ve had a few requests for this footage over the years, so today we’ve got it for you – the Marius Joubert hatrick against the All Blacks in 2004.

Playing at Ellis Park during their Tri Nations winning campaign, South Africa won the match 40-26 thanks to an inspired performance by Joe Van Niekerk at number eight, and then of course, Joubert in the centre.

He became only the second South African player to ever score a three tries in a match against the All Blacks, after Ray Mordt did it way back in 1981.

Van Niekerk, who is now with Toulon in France (and captained them last season), had one of his best performances in the green jersey on that day. It shows you what an impact a big, fast, and skilled number eight can have off the back of a scrum.

All Black fullback Mils Muliaina scored a brilliant try himself from the back, running through most of the Springbok defense. We’ll get that up sometime soon too.

Over time we aim to randomly feature other great Test match hatricks. Do you have any in mind that you’d perhaps like to see or share? Lets us know and we’ll see what we can do.