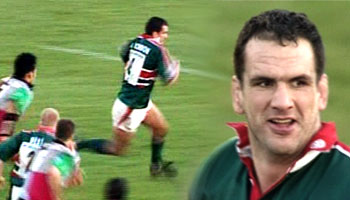 While the ELV debate from yesterday’s posting rages on, it’s probably a good time to show something completely different, this time in the form of a great try from the past.

While many people wouldn’t normally associate former England captain Martin Johnson with his running ability, this try is refreshingly good for a man who is over two meters tall and weighed close to 120kg’s back then.

The try comes from the Zurich Premiership, as it was known at the time, and is against Harlequins in what we think can only be the 2001/2002 season. It was a successful period in Leicester rugby history, with the club winning both the Premiership and the Heineken Cup in 2002.

Leicester’s longest ever serving captain then led England to victory with the Grand Slam the following year, followed by the World Cup win in Australia.

He was a hard man who’s style of play was uncompromising, but he was highly respected and his leadership was such that many name him as one of the greatest captains of all. He is currently at the helm of English rugby, and hoping to turn their fortunes around and achieve greatness once again, this time in the coaching role.

After all the plaudits, it’s safe to say that this certainly wasn’t what people would have expected him to be capable of. Can such a big man can actually sidestep, or more specifically, can this can be classified as one? It was probably more a change of direction, but was a helluva good finish either way because it resulted in five points for Leicester and bragging rights for the big guy.