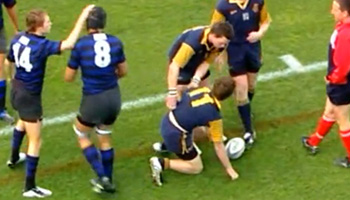 Highlanders co-captain Nasi Manu signed recently for Scottish side Edinburgh, and will join them at the conclusion of the Super Rugby season in July. To go with the signing, we’ve pulled out this massive hit he made when just a schoolboy years back in New Zealand.

The imposing number 8 debuted for the Crusaders in 2008 at the age of 19 and played off the bench in their grand final victory that year. Manu switched over to the Highlanders in 2010 and has since become one of the franchises most consistent performers, while also amassing 71 caps for Canterbury in the ITM cup.

Injury wrote him off most of 2010 and 2013, and the Highlanders on-field performances suffered without him, 2013 in particular ending with an embarrassing 3 wins from 16 starts.

The emergence of Kieran Reed has cruelly blocked Manu from higher honours, with many considering him another victim of New Zealand’s incredible breeding ground for talent.

Scottish fans will want to cool their jets though; unlike Sean Maitland, Manu does not qualify for the national side and in the past has signalled a preference to play for Tonga.

Manu’s departure will leave a massive hole at the highlanders – he regularly leads the team for ball carries and tackles and captains from the front with intimidating physicality.

These are traits that have always been apparent, as this clip of Manu playing for Christchurch Boys High School in 2006 makes abundantly clear. Counter attacking from their own half Marlbrough spin the ball wide to their poor unsuspecting winger, who moments later gets absolutely crunched by a flying 17-year-old Manu.

Posted By: joshbristow
Thanks
Sorry there has been an error
Login or Register to comment