Mat Luamanu's brutal tackle gets him a five week ban 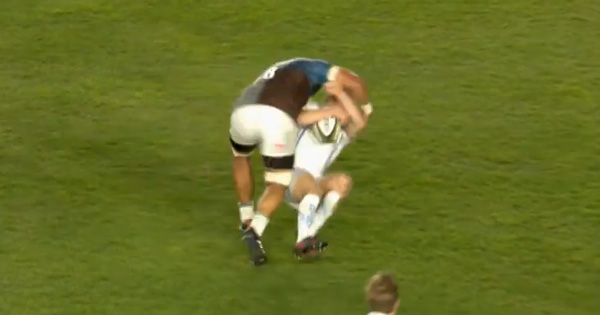 Harlequins forward Mat Luamanu has been suspended for five weeks following an RFU disciplinary hearing in London last night. Luamanu was adjudged to have contravened law 10.4(e) for dangerous play after his big tackle against Exeter Chiefs at the weekend.

The hard-hitting number eight received a yellow card from referee Craig Evans during the match for his tackle on Will Hooley, but was subsequently cited after the independant citing commissioner felt the challenge warranted a closer inspection.

Luamanu pleaded not guilty, however the chairman on the RFU discplinary panel, Sir James Dingemans felt that the tackle needed further punishment.

“The panel upheld the citing, concluding that Mathew Luamanu had committed a dangerous tackle because he had made contact with his head, having been reckless within the meaning of RFU Regulation 19.11.8(b) and Appendix 5. The panel imposed a suspension of five weeks.”

Luamanu is free to play again on 13th December.

View more of Luamanu’s huge hits in our Related Posts, and match highlights on page two