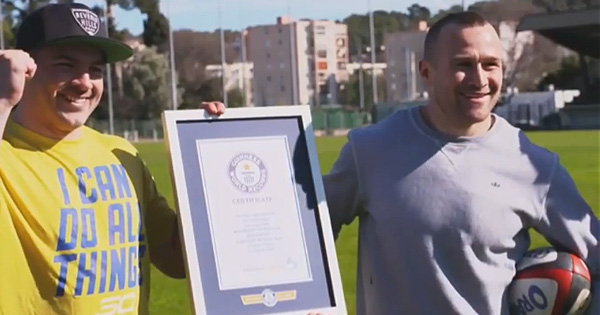 Toulon and Wallabies backs Drew Mitchell and Matt Giteau have been known to be some of the most laid back, biggest jokers in rugby. Both had their careers reignited last year with Test call ups, but their latest achievements are some of their proudest of all.

As if a professional career with European powerhouses Toulon doesn’t keep him busy enough, Mitchell has taken it upon himself to see how many times he can appear in the Guinness Book of World Records.

His first attempt was to see how many apples he could crush with his bicep in a minute.

As you can see (hit play above), he achieved that with ease, so it was on to the next thing.

Jaffa Cakes! How many could he eat in a minute? The World Record stood at 17.

.@Drew_Mitchell has one Guinness World Record in the bag, but can he eat his way to a second?! #DrewsWRs @GWR https://t.co/DdnpEu3l0o

So.. on to the next challenge, and for this one he enlisted the help of his good pal Giteau, who has some of the slickest hands in the business. The record for passes between a pair, in a minute, stood at 71. Giteau was definitely keen to get in on the record breaking action.

Check! The playmaker was chuffed – see the picture he tweeted down below.

Winger Mitchell didn’t stop there though. His latest attempt, again in conjunction with Sky Sports, sees him take on a press ups challenge, attempting to break the Guinness World Record for the number of knuckle press ups completed in a minute. The record stood at 72..

There is sure to be more on the way, as Mitchell is determined to break as many records as possible. We will keep you up to date as and when the next record attempts take place.

For now, both men can be pleased to say that they are officially Guinness World Record holders.

Happy Birthday to Drew, who celebrated his 32nd birthday on Saturday.

Ross Thompson is confident that Glasgow will respond positively and immediately to their 52-17 defeat to Exeter on Saturday.