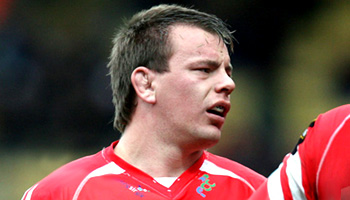 Scarlets hooker Matthew Rees was given his marching orders against Harlequins on the weekend for a tackle that, according to the officials, was without the ball and possibly dangerous.

It was to be the last Heineken Cup clash at the old Stradey Park, and the Scarlets were looking to give the home faithful the send off they deserved. After ten minutes, it looked like they were on route to achieving that, but Harlequins fought back and despite Llanelli (now Scarlets) leading 19-3 at half time, the game ended 29-22 to Harlequins.

Rees’ yellow card came at a vital time with the loss of the Welsh hooker having an impact on the match. Coach Nigel Davies refused to blame the sending off for the loss, but did have a few words to say about it.

“It was a tough call but it was made and we had to deal with it,” said Davies.

“It had an influence on the end result but I was more annoyed that tactically we went away from what we had spoken about at half-time.”

The hit on Tani Fuga came as the Samoan neatly flicked the ball on with Rees approaching. Rees was seemingly committed, and the tackle looked fair, but the referee deemed that because Fuga didn’t have the ball, it was a yellow card.

The way Rees speared Fuga when following through would have had an influence on the decision no doubt, but some would be inclined to say the sending off may have been a bit harsh.

Everyone views these type of tackles differently though, so we thought it would be interesting to stick this up and see what the opinions are.