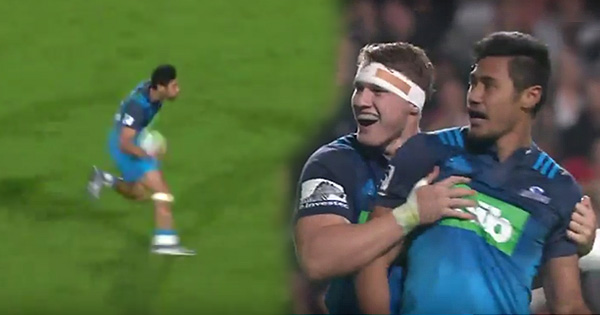 Blues fullback Melani Nanai scored a classic 55m solo try but it wasn’t enough as the Chiefs rallied to claim a 29-23 victory in another classic New Zealand derby thriller in Hamilton. The win sees the Chiefs extend their lead atop the Super Rugby standings.

The Chiefs led 10-6 at halftime after a Mitchell Graham try was controversially awarded, despite it looking as though there was a foot in touch. They went on to score another four, through Shaun Stevenson, Aaron Cruden, Seta Tamanivalu and Brodie Retallick.

The Blues came out firing after the break, scoring two quick tries through Nanai and youngster Rieko Ioane, but the Chiefs ended the game as bonus point winners. The Blues picked up a single point for coming without seven.

“If you read the paper you would think we were going to blow them off the park but we knew coming down here they had a point to prove and we really had to grind it out,” said Chiefs captain Sam Cane. “Far from perfect, but a win nonetheless.”

You can view full match highlights above