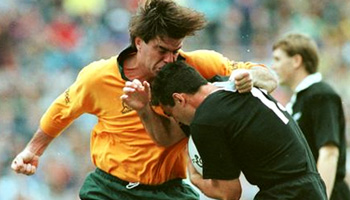 Not too long ago we featured the 1996 classic Bledisloe Cup match between the Wallabies and the All Blacks from Suncorp Stadium in Brisbane. Frank Bunce scored the late winning try, but it was Michael Brials malicious attack on him early on that had many people talking.

Six minutes into the crucial Tri Nations match big Jonah Lomu was superbly tackled by the much smaller Ben Tune. As the ball was recycled, All Black center Bunce picked up, but was confronted by the uncompromising Wallaby number eight, Michael Brial.

Brial unleashed a barrage of seemingly unprovoked strikes as Bunce played punching bag for what seemed like ages. Not too many of the shots actually landed, but the incident sparked outrage in the New Zealand camp.

Astonishingly, referee Jim Fleming chose not to send Brial from the field, instead only reversing the penalty that was originally awarded to the Wallabies.

New Zealand coach John Hart was outraged at Flemings ruling of the incident, with Bunce, the man on the wrong end of it, being equally surprised.

“I couldn’t believe it he went right over the top,” Bunce said afterwards.

It later emerged that Brial may still have held a grudge about the way Bunce flew into him at a maul, injuring him, four years earlier.