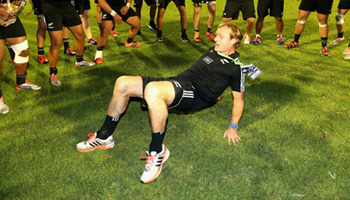 Yes, it might not have been perfectly executed, and he may not be the best street dancer on the planet, but New Zealand Under 20 coach Scott Robertson’s World Championship winning celebrations perhaps gives us an insight into the kind of bond shared within the group.

The former All Blacks and Crusaders forward was clearly overjoyed at the victory over England, so couldn’t help himself when a circle formed and he was called upon to bust some moves.

While it’s just a former player dancing, it’s great to see that rather than wearing a suit and tie and trying to keep himself above the rest of the squad, his approach is to just be one of the guys. And it clearly works. We have to wonder though, will this catch on, Steve Hansen?