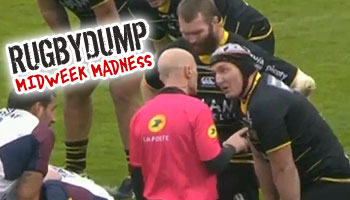 In the TOP14 match between Bordeaux Begles and LA Rochelle at the weekend, a blatant piece of cheating (or a brilliant piece depending on which way you look at it) occurred when La Rochelle lock Leandro Cedaro used a second ball to stop a Bordeaux attack in its tracks.

Bordeaux had just been awarded a penalty 10 metres out with Begles’ Julien Rey running back to collect the ball which had just been kicked away. Another ball is thrown onto the pitch and the home side promptly take a quick tap.

You then see Rey’s kicked ball bobble into view a couple of phases later, and when Jefferson Poirot picks and goes from a ruck, Cedaro throws the ball towards him.

The referee immediately blows but whatever excuse Cedaro gives him, he gets away with it as the referee simply tells him it was stupid, and Begles are awarded a scrum.

They score swiftly after but still end up losing the game, 21-22.

What do we think? Was Cedaro’s extra ball an attempt at disrupting the attack? Or was he just trying to throw the ball away and it inadvertently looked suspicious?