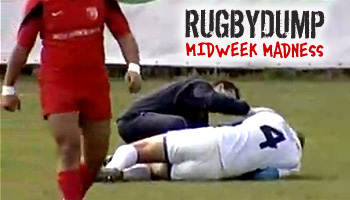 This is the big fight that took place in Bucharest on Saturday in a match between Dinamo Bucaresti and Farul Constanta. Weve found the two clips which we feel feature the most comprehensive coverage of the incident.

The league leading rivals came to blows only minutes after kickoff, with the fight beginning at the scrum, but soon spreading across the field, involving all players, and apparently some of the spectators too.

When order was restored, the referee showed red cards Dinamo centre Darie Curea and prop Flavius Dobre, both of whom are Romanian internationals.

Nine players were sent to hospital after the match, with three Georgian players being among those hurt, according to Constantas coach Virgil Tudose.

The Romanian Rugby Federation has handed suspensions to two Farul players and seven from Dinamo, with the Farul president and club coach also being penalised, along with the Dinamo trainer.

The Romanian Rugby federation said it “condemned the players for conduct devoid of fair-play”.

Dinamo president Elisabeta Lipa said the club coaches would be dismissed “if it emerges they incited the violence”.

The game was apparently won 3-0 by Dinamo Bucaresti, although there has been talk about the result being altered (as punishment) following the suspensions.