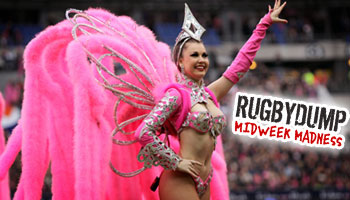 It’s not technically the middle of the week, but Midweek Madness describes this best as we look back at what happened before the Stade Francais vs Toulon game at Stade de France. It included some overweight guys pushing a float, a caged leopard, and a bare-chested girl who clearly wasn’t too bothered by the cold.

Over the years Stade Francais have pushed the envelope in terms of marketing their brand in Paris.

The hot pink colour of their jerseys has amused macho traditionalists and created a whole new culture within the club, once which of course includes a calendar that comes out each year featuring their semi naked rugby players.

The jerseys have become more shocking as each season comes round and while their eccentric mix of art and kitsch leaves many giggling, its all part of the brilliance of club president Max Guazzini as he manages to bring in the crowds and get people talking.

The latest jersey is a collectors piece and features leopard prints, on pink of course, which was the reason behind the feline creature appearing as part of Saturdays extravagant show.

Close to 70 000 people turned out in horrific weather in the French capital to be part of the event as the build up to the game is treated as an integral part of the days viewing.

It started with a few easy-on-the-eye dancing girls but soon got weird as a group of scantily clad giants walked out dragging a massive float. When it was opened, it revealed two beautiful sights, one of which was staring out from a cage and the other holding a golden rugby ball.

If youve read this far without hitting play.. impressive. What else is impressive is that the TV crews viewed this as art and rather than switch away from what was a fantastic spectacle, they showed it in its entirety. Fair to say its probably the weirdest start to a match we’ve seen, besides the bees recently, but its also a massive marketing success.