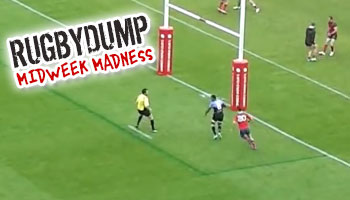 There were two really unfortunate, yet highly amusing incidents at the Limerick World Club 7’s at Thomond Park on the weekend. Both videos feature players about to score runaway tries, but result in red faced errors instead.

Fiji’s Daveta ended up winning the inaugural event, beating Munster and Auckland on their way to a 36-12 victory over the Vancouver Bears in the final.

This event was a bit of a warmup for the main tournament at Twickenham, this coming weekend.

In the main clip below we see amateur footage of a Fijian absoutely skinning a Munster player, but as he gets close to the tryline he decides to stroll in, only to be caught from behind..

The second video, seen here on page two, features a Waratahs flyer, quite possibly Taqele Naiyaravoro, as he strides away for what should be an excellent break out try. He too fails to score, instead dropping the ball as he casually attempts to dot it down.

Credit to Paudie McCarthy and Paul Collins for the videos

British & Irish Lions guru Ian McGeechan has said that Warren Gatland would be top of his list, if England had to pick a successor to Eddie Jones 'tomorrow'.

How at 19, Manny Iyogun made transition from 105kg loosie to 115kg loosehead

It's now a year since Emmanuel Iyogun, the back-row-cum-prop, jumped off the deep end to ensure Northampton didn't have to forfeit a match.