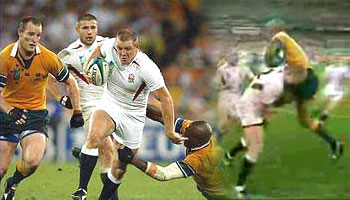 Though Wallaby legend George Gregan would never show it, this unceremonious dump in the 2003 RWC Final would have hurt. As you’d expect from him, Gregan gets up quickly and walks it off, epitomising his the tough-as-nails persona.

Nonetheless, this is a great show of strength from big England centre Mike Tindall and would have no doubt rattled their determined opposition.

The game went on to become one of the greatest encounters ever in world cup history with the tension and drama one would expect from a world cup final.