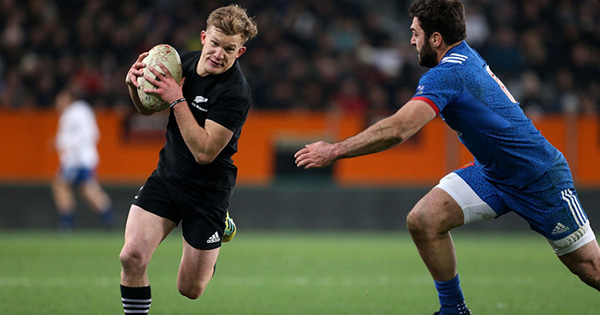 In a script similar to the past two weeks, the New Zealand vs France series had more controversy surrounding the referee. It was a turning point in the match, as New Zealand soon found their top gear to finish off a French whitewash 49-14 and 3-0.

It was all France in the opening minutes in Dunedin, so it was no surprise when they were the first to touch down. They managed to remain poised after captain Morgan Parra was knocked out of the match early on with a concussion.

Replacement Baptiste Serin filled in nicely and sold a dummy for a well-deserved French try after having dominated early possession. The returning Wesley Fofana scored another magical try shortly thereafter.

However, the French couldn’t capitalize from the early success and were totally overwhelmed in the second half.

The turning point – and moment of controversy – came with the 32nd minute try awarded to Damian McKenzie. McKenzie exploded through a hole that was created when referee John Lacey obstructed Serin’s path on defence. The All Blacks took the lead and never looked back.

Lacey did ask to see the play on the TMO, but quickly declared “I’m happy” and allowed the try to stand. It’s yet another ‘what if’ from the series.

Obviously the two coaches stand in disagreement concerning the incident.

Speaking of the incident, French coach Jacques Brunel said: “To me, it seems quite clear, and quite straight forward, that if a player or a referee should obstruct the play, then it disadvantages one team or the other, then it needs to be accounted for and dealt with. It seemed clear in that situation.”

All Blacks coach Steve Hansen disagreed: “There is nowhere in the rule book that says the referee can cause obstruction. So, he’s got to stand somewhere. And it’s not our fault that our guy ran close to where he was standing, it’s happened to us a few times in the past.”

The fact remains, the All Blacks made the necessary adjustments and started scoring tries at will. The French truly had no answer for MacKenzie or Reiko Ioane, who accounted for five of the All Blacks’ tries, with a hat-trick to Ioane.

Another factor was the enormous pressure put on a French lineout that struggled all series.

With the win, the All Blacks sealed the 3-0 series whitewash, scoring a cumulative total of 127-38.