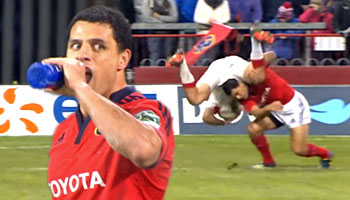 Round three of the Heineken Cup took place at the weekend, with one of the biggest match-ups being the clash between Munster and Saracens at Thomond Park. It didn’t disappoint, and served up this absolute beauty from Doug Howlett.

It wasn’t the highest scoring game we’ll see but it was a great contest, with Munster taking the spoils 15-9 through five Ronan O’Gara penalties. There was plenty to talk about – including Owen Farrell’s four missed penalties – but one of the moments of the match was this sensational tackle from the great former All Black, Doug Howlett.

In the last few weeks, for whatever reason, there have been a number of incidents involving dirty play, citings, and the subsequent suspensions and derision from all sides of the planet.

With that comes a sizeable element of negativity and it feels like almost every day RD posts stories about players getting in trouble (this week is no exception). Williams red card | Hartley citing

Whether the game is becoming dirtier or the laws are making it tough to play, it’s taking away from the game we love and in many ways, can also give this website a bit of a bad look.

So when Howlett made this solid, legal, bone-crunching hit on the always dynamic Schalk Brits, it brought with it a strange sense of joy. Not only did a winger absolutely lay into a forward, but the tackle was perfectly legal, and the officials stayed out of it despite Brits landing a bit awkwardly.