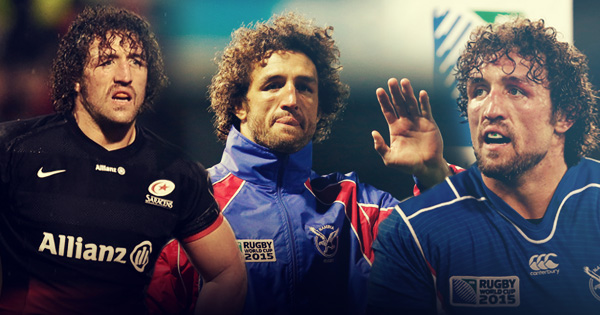 Namibian and Saracens legend Jacques Burger has announced that it’s time to hang up his well worn boots, playing his final game this coming Sunday. Burger, now 32-years-old, has played in three World Cups and forged a reputation as one of the hardest players around.

Coming from the lowly ranked Namibia, Burger found his way to professional rugby through neighbours South Africa, playing with Griquas before earning himself a place at the Bulls, then standing out for his country with some courageous performances in the 2007 Rugby World Cup.

A contract with Saracens followed, and he hasn’t looked back. Due to his fearless style of play, his body has taken a pounding though, so he says enough is enough. He announced his international retirement after being concussed against Georgia at the 2015 RWC.

He will now return to his other love, farming, back home in Namibia.

Burger released a an extremely sincere statement yesterday, talking about his love for the sport and how his many years in top flight professional rugby have been the best of his life.

“So, the body (and face) have finally had enough. They’ve been begging me to stop playing for a while now and the time has come. I’ve loved playing the game of rugby. I am blessed to have done so at a high level.

“Big defeats, big victories, Cup Finals and three Rugby World Cups. I was obsessed with rugby, I live for it and was willing to break for it.

“What sticks out for me? The sick feeling that consumes you before a big match. The hairs standing up on the back of your neck in pre match talks, guys screaming at each other and the sound of a big collision between two players.

“The emotions, the atmospheres, the camaraderie between a group of players. All will live long in the memory.

@Nabasboer A classy farewell message, inspiring as ever. You’ve done your country & your family proud! Wishing you all the very best

“What I love about this game, is that there’s no hiding. To play it you need to be brave, sometimes a bit brutal, but when you walk off you shake hands and act like kids again.

“But the most important thing I’ll take away from my career, and the thing I’m most grateful for, is the friends I’ve made whilst being on this journey. All the success means nothing if you can’t celebrate it with you buddies after the match.

“That first cold beer after you’ve put in a shift together is the best feeling around. Those memories will stick forever. I’ve been overwhelmed by all the messages of support I have received and I am truly humbled.

“May I take this opportunity to say a big tahnk you to everyone who has supported me throughout my career. It’s been a period of my life that has had highs and lows, but that support has always been there.

“I’m sure in the future there will be tough times, but when I’m done and awhen I’m missing the game, I can look back on this wonderufl period in my life with real pride and affection.

“I’m very excited about what the future holds, but until then and for one last time this Sunday…

Below is a farewell interview, and in the Related Posts you can see more of Jacques in action