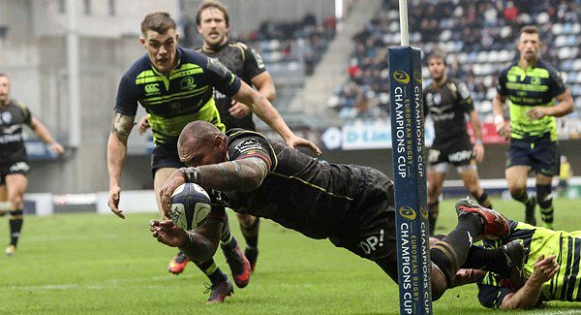 Nemani Nadolo played an important role in Montpellier’s European Champions Cup win over Leinster at the weekend. The Fijian winger was as destructive as ever, scoring two tries and producing a thundering defensive performance as well.

Leinster snuck a late losing bonus point thanks to Isa Nacewa’s try and conversion, but it was a mere consolation as Montpellier dominated the game and deservedly took the win.

Nadolo’s performance definitely stood out, and notwithstanding his two tries, defensively he caused Leinster a myriad of problems.

At 6ft5 and just over 22st (140kg) Nadolo is a beast of a player and capable of pulverising the opposition in much the same way as Jonah Lomu used to when he broke onto the scene.

His tackle on Leinster centre Gary Ringrose was one that stood out as it arguably stopped a dangerous Irish attack. The former Crusaders winger then showed his strength even more as he bulldozed his way through two Leinster defenders on his way to score his first try.

It was probably one of Nadolo’s easiest tries, and later he got the better of Heaslip again as he smashed him with a blindside hit, capping off an incredible all-round performance.