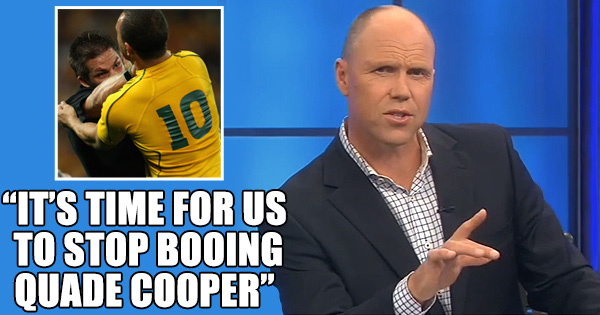 Former All Black Jeff Wilson says that it is time New Zealand fans stop booing Wallaby Quade Cooper. Wilson’s comments were made on SKY NZ’s The Breakdown show, in reference to the constant booing Cooper has received whenever he gets the ball or is on camera.

The animosity stems from Cooper, who is actually New Zealand born, getting in tussles with Richie McCaw in 2011. Fans picked up on it, labelling him a bit of a cheap shot merchant.

There was a bit of a push in the face in Hong Kong, then a knee in Brisbane.

At the time Cooper explained the apparent fued as nothing more than part of the game.

“If I was to take any kind of backward step to Richie or anyone else on the field, then what sort of example is that setting for the rest of my teammates”, he explained.

At the Rugby World Cup in New Zealand that year, Cooper was booed at every opportunity.

It’s now 2016, some five years later, and it hasn’t stopped. Wilson says it is enough, and is tarnishing the image of New Zealand rugby.

The short clip is below, and below that you can see a fascinating piece that we posted in 2011, made by ITV and featuring New Zealand’s love for making Cooper Public Enemy number one.

The aforementioned 2011 feature that includes quotes from pro players and Cooper himself: