New Zealand win the Adelaide Sevens for the first time 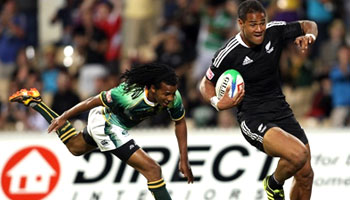 New Zealand took the Adelaide Sevens title for the first time as they beat South Africa 28-20 in the final of the Australian leg of the IRB World Series Sevens. They lead the series by 13 points, with two events left to play.

Tournaments in London and Edinburgh are up next, with England just a few points behind and coach Gordon Tietjens realises that any mistakes in the UK could cost them dearly.

“Thirteen points is not many, we can slip up as early as the quarter finals and they are right on your heels again. We go into the last two tournaments and just like we did here, one game and one tournament at a time,” he said.

“We may be favourites but we just go back, review the situation and certainly look to get a little bit better and attack those last two tournaments with the same hunger we did here.”

Tomasi Cama was destroyer in chief for the New Zealand side, producing a stand out performance that overshadowed the qualities of South Africa’s danger man, Cecil Afrika.

South Africa were up 20-14, having scored four tries to two, but Cama then came to the party with a few moments of brilliance to put the game out of reach and pick up New Zealand’s first ever win at the Adelaide tournament. The London Sevens kicks off on May 21st.

This clip features highlights of not only the final, but some of the other games leading up to it.